Just added to your cart

How to Sharpen a Japanese Yanagiba Knife 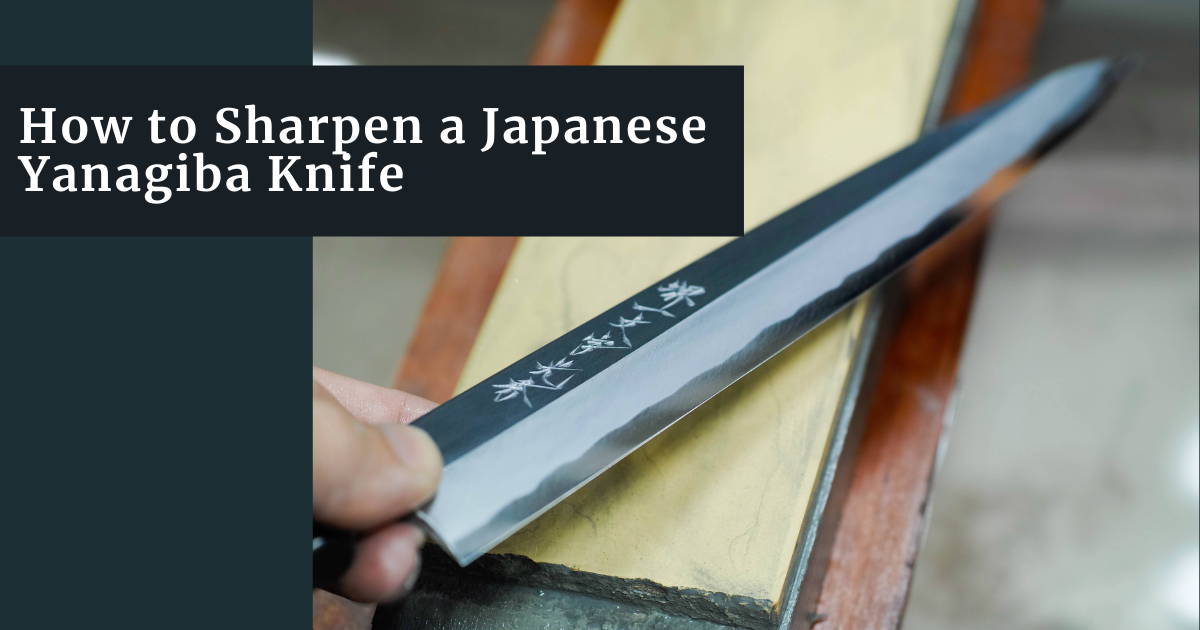 A Yanagiba is used for slicing sashimi with a pulling action.
The cut must be performed in one fluid slice or the sashimi will have jagged areas, leading to an unpleasant appearance.
The strength of the Yanagiba is in the blades length and superior sharpness.

To do this, you need to sharpen the main edge at a slight angle

1,Sharpen the rounded edge of the blade

When the blade is sharpened standing up, a two-stage edge is formed at the tip of the blade.
Use this two-stage blade as the standard for sharpening.

2, Erase the two-stage blade with a rough abrasive stone.

The two-stage blade that was just attached is sharpened with a rough abrasive stone until it disappears.
If the entire cutting edge is not sharpened evenly, it will lose its shape.

At this time, it is important to note that Japanese kitchen knives (except Honyaki) are a combination of steel and soft iron.
The cutting edge is also 2/3 of soft iron. If you try to sharpen it with a uniform force, only the soft iron part will be sharpened and the shine line will be broken.
Press the blade against the whetstone with the fingers of your left hand, and apply force to the cutting edge with your right hand, fighting with each other to sharpen the entire cutting edge.

3, Attach the blade with a medium grindstone.

The surface of a cutting edge sharpened with a rough abrasive stone is very rough.
Use a medium grit stone to polish it until the scratches disappear.
Since the blade is thin, it is easy to get bounce and the blade will decrease.

Unlike the sharpening of a deba knife, a yanagiba knife is a knife that requires sharpness.
When sharpening with a medium-strength stone, do not focus too much on the clam-shaped edge, but sharpen the entire blade.

When sharpening a yanagiba knife, be careful not to lose the shape of the cutting edge.
Yanagiba knives have a thin blade and are long and thin, so the tip of the blade often becomes warped like Concorde.
This is because the grindstone has not been applied to the cutting edge.
Please sharpen it with a little awareness so that the whetstone touches the cutting edge.

4,Sharpening with a finishing stone.

In order to improve the sharpness of the blade, it is sharpened with a finishing stone.
The first step is to polish the scratches made by the medium grinding stone on the entire cutting edge with the finishing stone.
Do not sharpen until you get a return.

Lightly pull out the smaller edge with the finishing stone in the same way as during medium sharpening.
Sharpen until this smaller edge disappears.
At this stage, sharpen the edge of the yanagiba knife with the clam-shaped blade in mind.

5,Press the back side.

At this point, the cutting edge is already attached.
However, in this state, the edge of the blade is too thin and it is easy for the blade to spill.
To make the blade thicker, set the blade at a 45-degree angle and draw a smaller edge (thread edge).

Use a finishing stone.
If you use a medium grindstone, the smaller edge will become too thick and the sharpness will deteriorate.
Set the blade upright at about 45 degrees and lightly sharpen the entire edge of the blade until it starts to burr.
After that, press the back side of the blade in the same way as in [5].